You may click the map to discover more information about each point of interest on the walking tour. 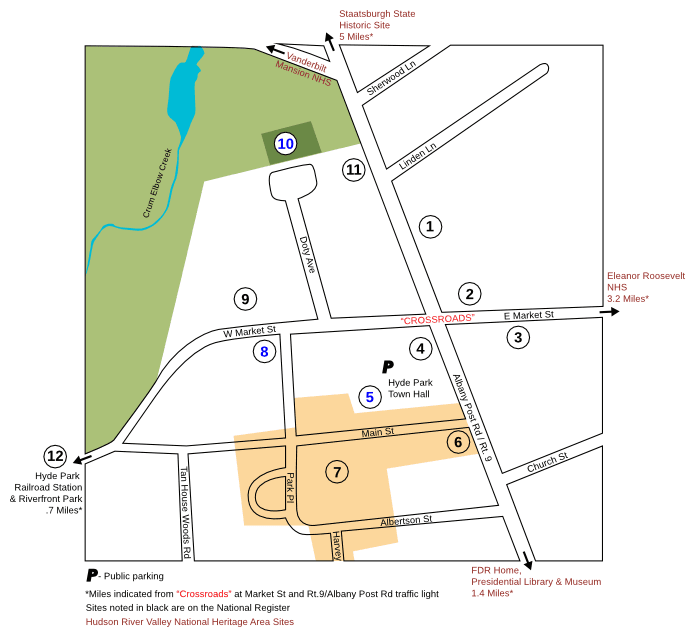 English explorer Henry Hudson, sailing for the Dutch East India Company, anchored the Half Moon off Crum Elbow Point in 1609, making peaceful contact with the Wappinger Indians who lived along the shore. Settlement began in the early 18th century, spurred by three large land patents granted by the English colonial government to entrepreneurs who had purchased land from the Indians. Trading posts and landings grew into post offices and hamlets - first Staatsburg in the north, then Hyde Park in the south. The Town of Hyde Park, established in 1821, encompassed both hamlets.

This walking tour focuses on the historic Hyde Park hamlet centered at the crossroads of Market Street and Albany Post Road, from the Vanderbilt Mansion National Historic Site* south to Albertson Street. This area formed the municipal, commercial, social and residential core of the community.

The featured properties include architecturally and historically significant churches, public buildings and residences listed on the National Register of Historic Places.

Other sites pertain to the Town's local history and inhabitants. Hyde Park's most famous native son, Franklin D. Roosevelt, is also well-represented, his involvement with the town taking many forms over his remarkable lifetime. Download the Walking Tour Brochure (PDF).

*Vanderbilt Mansion National Historic Site was formerly part of the Bard family's original "Hyde Park" estate from which the hamlet took its name. The estate developed from a patent granted in 1705 by Edward Hyde, Lord Cornbury, royal governor of the New York colony.